Her dark brown hair was pulled back into a tight bun. On top was a perfectly placed white head covering, complete with white strings, her modest caped dress hung well below her knees. The 17-year-old scooped ice cream from the cooler as she tried to place the customer’s accent.

“Why do you wear that,” He asked, pointing to her head.

She referenced 1 Corinthians 11 where Paul instructs women to keep their heads covered and Ephesians 5 where the Paul tells women to submit to their husbands. That’s the only answer she knew. Not too long prior, she had called her older sister who had stopped wearing the covering, pleading with her to come back to the faith.

“I’m curious,” the customer continued, “I’d like to know more about your religion. Come see me at the table over there when you get a break.”

She was used to people’s questions and curiosity. She was curious about him. Her first free moment, she walked over to the table where he waited patiently. Their conversation flowed easily. He was a businessman from South Africa and that brought him to the area. He had never seen Mennonites before and had lots of questions about their faith.

“What do they believe about the Holy Trinity,” he asked.

“The what?” She replied.

“The Holy Trinity, you know, the Father, Son, and Holy Spirit.”

“Um, I don’t really know,” She muttered, embarrassed. “I’m not sure I really know much about the Holy Spirit.”

He went to great lengths to share with her how the Holy Spirit guides, convicts, woos, calls, changes, sets free. He told her that while he respected her religion, it seemed to come with a great deal of bondage, unlike the freedom Christ offers. He shared enthusiastically, but with love and joy, not condemning or mocking like she was used to from those who didn’t understand her religion. He seemed to understand that her faith was not just a personal interpretation of Scripture, but was rooted in generations of tradition and ritual that had become her very identity. In her mind she was wondering what kind of flake she was talking to, but something in her spirit stirred.

I am that girl.

Charles and I stayed in touch, writing occasionally, even though I never saw him again. Several years went by. I eventually stopped wearing the head covering and plain clothes and at some point the letters from Charles ceased. I never gave it much thought. I was always amazed he had taken so much time and interest in a little Mennonite girl from across the pond anyway.

Then one day I received another letter post-marked South Africa. This time it was Charles’ mother telling me he had died unexpectedly of a heart attack at 42 years old. While she grieved she consoled me, his long distance friend, that he was ready to meet God and that he would be waiting for us when our time came. She told me that he had often spoken of me to her and that he was excited about the freedom I was finding in my own relationship with God.

I still have a refrigerator magnet he sent me some twenty years ago. Every time it catches my eye, I thank God for sending Charles my way.

As my freedom grew, so did my “Holy Spirit Fire.” I wanted everyone to have a taste of this freedom. I shared with anyone and everyone with or without their consent. I knew the truth and it had set me free.

I got bold with my new-found freedom, but not everyone was ready to be enlightened. I could rapid-fire loveless truth bullets faster than lightening, leaving a trail of stunned, wounded loved ones in my wake.

One day I drove my rusty (not-so-trusty) Chevy Blazer to an Old Order Mennonite preacher’s house, kicking up a trail of dust as I barreled down the long gravel driveway. I caught him completely off-guard in the garden and demanded answers to questions about this faith I’d always had, but was too afraid to ask before. By this point I had studied Scripture on my own and I had a Scriptural rebuttal for every single answer he gave me. He was speechless and I was proud.

Nobody won that day. Although I did eventually gain a reputation as a “Scripture authority to be reckoned with,” I lost friends. A lot of them. No one wanted this freedom I had when it caused me to be arrogant and heartless toward those who understood and interpreted Scripture differently than I.

Over time my message softened. I began to remember where I’d come from and how firmly and faithfully I believed what I believed, despite the bondage. I no longer consider myself any more enlightened than the next person, because we are all on an individual faith journey. I also came to love and cherish the foundations of my faith formed in youth and childhood.

We can boldly proclaim our freedom and enlightenment all day long, but I quote Paul in Galatians 5:13-15 NLT. “For you have been called to live in freedom, my brothers and sisters. But don’t use your freedom to satisfy your sinful nature. Instead, use your freedom to serve one another in love. For the whole law can be summed up in this one command: ‘Love your neighbor as yourself.’ But if you are always biting and devouring one another, watch out! Be aware of destroying one another.”

I go back to my story about Charles. If he had presented his Holy Spirit theology in an arrogant or demeaning way, I would never have listened. I would have been defensive and closed, spouting off my rhetorical answers like a pre-programmed champion. But instead he shared with love and my spirit resonated with his words.

We can dispute our theologies all day long, we can argue man’s laws and God’s laws, and which ones were historical and cultural and which ones are timeless and eternal. But this I can assure you, “the Holy Spirit produces this kind of fruit in our lives: love, joy, peace, patience, goodness, faithfulness, gentleness, and self-control. There is NO LAW against these things.” (Galatians 5:22-23 NLT). Emphasis mine.

There will always be people who disagree or understand differently. We should expect and respect that. But they are living as faithfully to the Gospel as they understand it. I am always eager to break bread together, to share honestly and openly and safely, and to learn from one another. I am faithfully living out my call as best as I can understand it with my finite and imperfect being and enjoy walking this road with others. 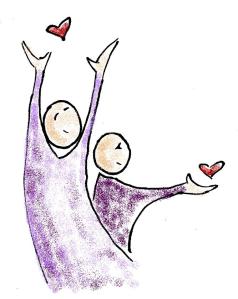 Our faith stories are important. Let’s not diminish or hinder the work of God in one another with loveless truth bullets that maim and wound other parts of the body who understand and interpret Scripture differently. Find common ground and build trusting relationships with people outside of your circle of influence and see what fruit grows. Seeds sown in discourse and contention will reap simply that. Seeds sown in love… Well…

Hebrews 10:24 NLT “Let us think of ways to motivate one another to acts of love and good works.”

2 thoughts on “Spiritual pride versus truth in love”