Thanksgiving has always been my favorite holiday. Autumn has always been my favorite season. Initially I was going to name this my obligatory thanksgiving post, but there’s nothing obligatory about it. I wouldn’t have to share anything publicly, but I truly can’t help it. There is a well-spring of gratefulness inside me brimming with thanks, and I cannot help but let it spill over.

I am thankful for all of the obvious things, freedom, faith, family, friends, shelter, food enough, clothing.

But I’m especially thankful for small things too…

Like Christmas lights. I hung this string in the boy’s room this evening and haven’t stopped looking at their beautiful glow. I am thankful for these lights and think of those who do not have the ease of electricity.

And fun in the fall leaves. I love their crunch, their smell, their color, and the endless hours of fun they provide for childlike hearts. I am thankful for fallen leaves and think of those whose hearts are so heavy they cannot find the joy in them. 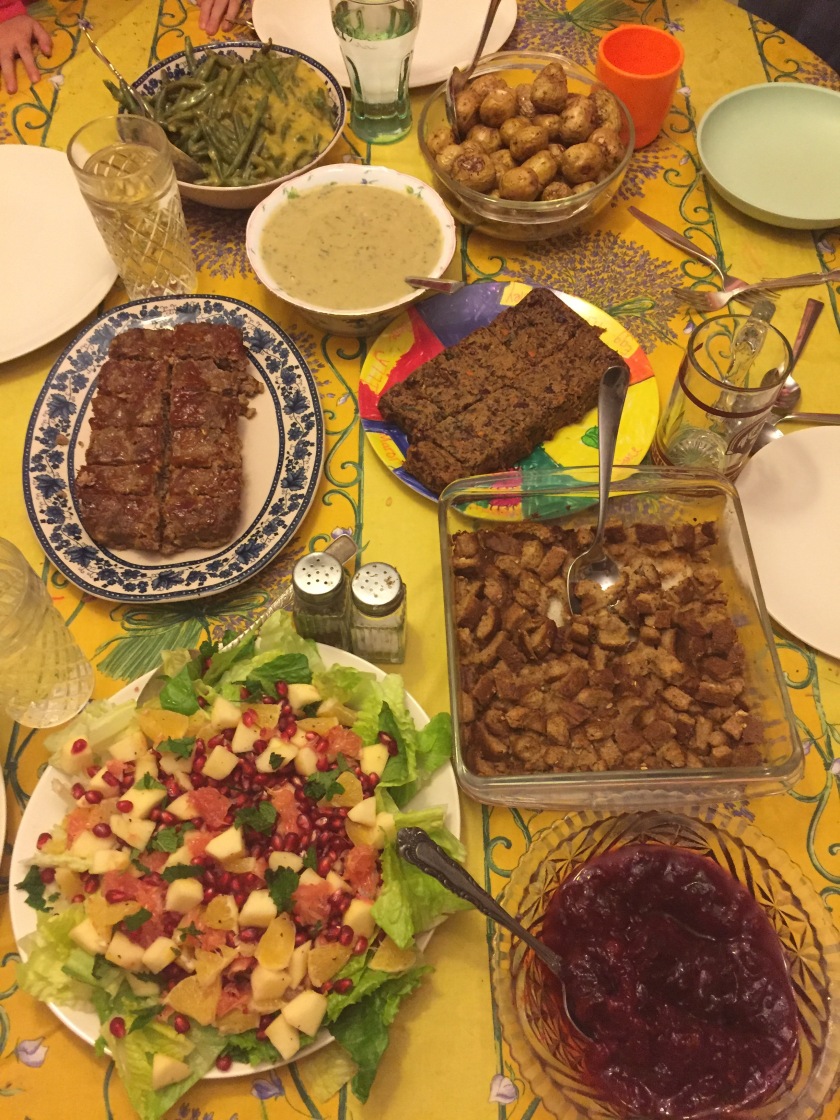 I’m thankful for birthdays and feasts. We had a birthday Monday and Tuesday this week in our household, so Tuesday evening I made this spread of meat loaf, hippie loaf (a bean and veggie loaf), stuffing, herbed roasted baby potatoes, Dijon glazed green beans, mushroom gravy, cranberry sauce, and an apple, grapefruit, pomegranate salad. (All recipes except the meatloaf came from the Forks Over Knives App or the Meal Mentor app so everything except the meatloaf and cake were plant-based.)I also made the plant based pumpkin pie and pumpkin cranberry cookies the day before. I seldom cook so much at one time, but this was such a worthy celebration; my husband and our newest foster child whose life and presence is worth way more than a hearty meal. I am thankful for food, for abundance, and think of those who are hungry as we eat.

I am thankful for the beautiful area we call home and that even though I am currently too busy to do much hiking or horseback riding there are scenes such as this that I can enjoy from my van. So often I stop for a five minute reprieve to enjoy the scenery and inhale the fresh air. I am thankful for tranquil places and spaces and think of those who live in fear and threat of violence.

I could go on and on and could still never truly count all my blessings. I am bountifully rich in soul and love and even worldly things that to name them all would be an impossibility.

I will leave you with a link to one of our children’s favorite songs.

You can’t roller skate in a buffalo herd.

Wishing all a gentle and peaceful day of thanks.

Life has been unusually busy for us these past few weeks as we continue to adjust to a new foster placement and maintain our already hectic schedule.

These are the days I find the morning coffee I didn’t get to drink in the microwave in late afternoon.

The days I am thankful that an old top entertains four children for long periods of time.

I am thankful for friends who lend helping hands in so many ways, whether it be for our children, our non-profit, or for our larger community.

These are the days that pass so quickly, but that I will one day miss and long to re-experience.

In the meantime, I sit with our littles as they drift off to sleep. To stay awake myself, I read articles and often scroll through Facebook to catch up on friends and the rest of the world. I’ve been saving recipe links my friends have shared on Facebook. Tonight I made a combo of two I was most excited about, dill pickle soup and grilled cheese dippers.

The original recipe for the soup can be found here.

Since we eat a mostly Whole Foods plant based diet, I adapted the recipe, but I can assure you the original would taste quite fantastic as well! Here’s the recipe with my changes. The whole family loved it!

(I skipped the butter altogether)

Salt and pepper to taste

Method: Pour the vegetable stock into a large pot and add the potatoes and carrots. Cook until vegetables are tender, about 10-15 minutes. Add chopped dill pickles. Mix the plant-based milk and flour in a gravy shaker and shake well. Pour into soup pot, stirring continuously and vigorously. This will thicken quickly.

The other recipe I was excited to try was the grilled cheese dippers. I know that these grilled cheese include dairy, but we are not a teetotaler Whole Foods plant based family. You can also substitute vegan cheese and butter for these if you’d prefer. I want to try the tomato soup included in the post, but haven’t yet. Grilled cheese and homemade tomato soup have long been one of my favorite fall suppers.

The recipe for the grilled cheese dippers can be found here.

I’d love to know if you try these either with the original recipes or my adaptations and what you think. I hope you enjoy them as much as we did.

For some reason my mind was recalling childhood stories this evening and I thought I’d share a few with you.

1) By 1992, some of the family had strayed from our upbringing and were watching movies and television with friends. This was the year the movie “Wayne’s World” was released and for some reason it was a big hit for my oldest brother. He would walk around the house saying, “Party on, Wayne.”

After this went on for awhile my mom finally said, “I just don’t get it! Why would someone party ON Wayne?!”

Even after repeated attempts at explanation mom was still struggling with the idea of someone partying ON Wayne. Finally my brother changed the words to, “Continue to party, Wayne.” She got it then.

2) In the lifestyle in which we were raised, it was not unusual for a van load of relatives and/or friends to show up from out of state and stay with a host family. The host family would then drive their guests around for visits with others within the church.

Even though we all wore the “plain dress,” we could often tell at a glance if someone was not from our area.

One day myself, my two little sisters, and several neighbor kids, decided to dress up as “Canadian visitors,” and go for a visit. I don’t remember much what the other’s did, but I put powder in my hair to whiten it, pulled it straight back into a bun, and put on my mom’s head covering and bonnet. I also dug out her plainest dress and shoes. I was probably about 12 so to fill out her caped dress, I stuffed tea towels in the top.

We hitched up the horse and buggy and decided to drive the five miles or so to someone we knew well. I was driving.

The buggy looked a lot like this one, but had four doors instead of two. The horse was even close the the same color.
As we drove past the house of someone we barely knew, one of the kids tugged unexpectedly on the horses rein and he turned into their driveway.

Simple, I thought, we can just turn around and drive right back out. What I didn’t anticipate was a dog barking ferociously that would spook the horse.

I handed the reins to one of the boys and jumped out to manually turn the horse around, but the dog was awfully suspicious of me, too. Maybe he smelled the baby powder in my hair.

The dog started after me so I began circling the buggy to jump back in. The kids in the buggy were scared and had closed the door so I was out of  luck. Meanwhile, the matron of the household was standing at the door with a puzzled and somewhat horrified look on her face as the tea towels started falling out of the bosom of my dress. I was never so thankful for a disguise in my life.

Eventually we got the horse turned back around and I landed safely back in the buggy, along with the tea towels that had tried to escape. We did go on to visit our friends and were so well disguised that we had them fooled until they saw us close up and heard us talk.

I don’t have pictures because we didn’t have cameras. What I wouldn’t give to have that scene caught on a cell phone video.

For all that was hard in our lives, we sure did know how to have a great time!

I’m sorry I haven’t posted in awhile. I have a great recipe post in the works, but in the meantime, I’ve been ruminating on the gift of routine.

We recently added another youngster to our home through foster care. (That would explain my lack of posts because we’ve been getting to know one another.)

Sometimes as adults we feel stuck in a routine rut. We get up, we go to work, we come home, we navigate evening activities on the schedule, and so on, and for the most part it can feel pretty mundane. For children who’ve never had that consistency, routine can be one of the greatest blessings we can give them.

All children (and most adults if we’re honest) want to be reassured that life has routine and rhythm. We want to know that when we go out for the day (or night if we’re working night shift) that our humans are going to meet us back home at the end of the day. We want to know that when we leave home, we will return after whatever work or activity we are attending is over. We have a familiar places we frequent, places we pass daily, patterns, routines, that make up the big picture of our lives. 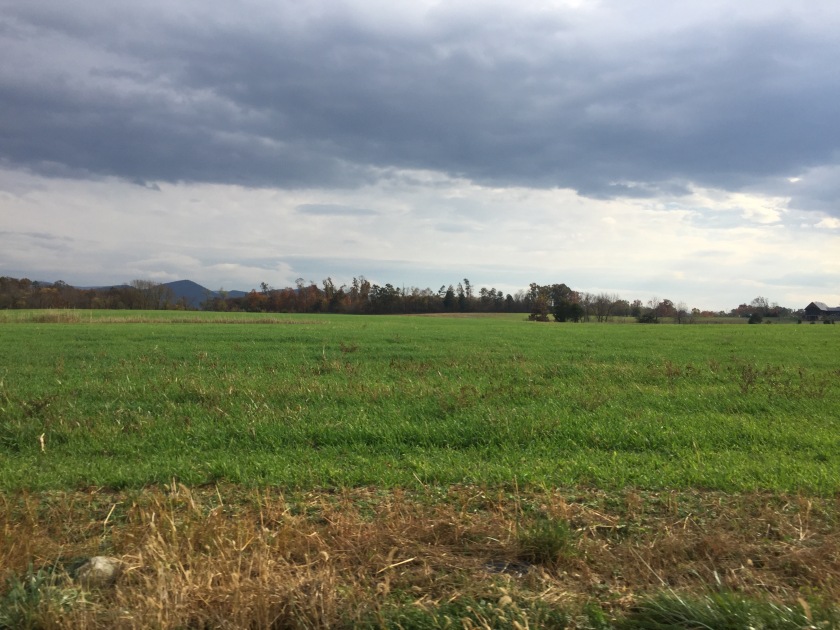 While breaking out from routine can be healthy and necessary from time-to-time, never discount the security these rhythms give us, especially our children.