Although it is taking slightly longer for the air to cool this year, I feel autumn in my bones. Hints of color christen the green summer leaves, the evenings are noticeably shorter, and the mountains call to my melancholy nature to retreat for the season.

Since our daughter died in June 2007, that innate instinct to retreat beckons even stronger. Thats just my nature. The mountains and solitude are where I find myself and God.

But retreating for a season is not an option, especially since our daughter died. October is Pregnancy and Infant Loss Awareness Month and I must rise above any hiding I might want to do to help bring a voice to the one in four women who suffer pregnancy and infant loss and to honor the memories of the babies that live on in our hearts.

Although most people in my life know how greatly we loved Sadie Rose, there have been people who would minimize her impact because she lived a short seventeen hours. For some reason, often without realizing, our society places less significance on a life known only to the parents and/or immmediate family and friends.

It matters not how well-known our lives are to the world. What matters is how deeply we were loved by those closest to us.

Before going further, I have spent countless hours in my work through the Sadie Rose Foundation with mom’s whose young child, teenager, young adult, or adult child died. I hear stories of their child that suffered a terminal illness, was the victim of a horrible fatal accident, died by suicide, succumbed to a lifelong illness, etc. My heart breaks with every single tragic story. I would never claim to know exactly how they feel nor would I ever compare my loss specifically with theirs. I pray I never know the anguish of the kind of loss they’ve known. This post is not about comparing losses.

From my experience, there is never an easy time for your child to die.

The purpose of this post is to give permission to all those who’ve known the life-long impact of pregnancy and infant loss a platform to share and to know they’re not alone.

In a society where mother’s who have known this loss are often confronted with comments like, “You are young, you can have more children,” “There must have been something wrong with your baby and this was god’s/natures way of dealing with it,” “At least you weren’t attached,” etc., raising awareness of the impact these tiny lives had on us is of utmost importance.

I even had someone accuse me once of not being truthful when I said our “child” died as an infant without explaining she only lived seventeen hours. As if to say because of her short life she could not be considered a child. Likewise, there were times I would catch myself saying, “She only lived seventeen hours,” as a way decrease the impact my story had on the horrified listener who had just found out we had a deceased daughter.

I dreamed of being a mother my whole life. I was raised in a culture where motherhood was among the highest callings and I knew there was nothing more I wanted for myself. Life took it’s sweet time in connecting me with Prince Charming and I spent my early twenties watching all my siblings marry, (including my two younger sisters) and most of my friends. I sat through many painful mother/daughter events with a lump in my throat and an ache in my heart, even while celebrating my own awesome mom. I began to wonder if my dream of being a mother would ever be realized.

In my late twenties, Prince Charming finally arrived. His horse hadn’t broken a leg, he wasn’t captured by dreams of his own fancy, he was simply waiting for that one right princess to carry off into the sunset. I thank God every day for the gift he is to me.

Less than three months after our October wedding, we were pregnant. To say we were thrilled was an understatement. Finally, finally, the dream of a lifetime would become reality for me.

My two younger sisters were pregnant at the same time, but due in early 2007. I was due September 16, 2007. The three of us are the youngest of seven children and throughout our childhood we were called, “The three little girls.” How exciting to be on this journey of growing babies together!

My sisters delivered a healthy girl and boy. I went for my twenty-week ultrasound in the spring. It was then our doctor and friend had to tell us the difficult news that our baby’s measurements were not adding up. He referred us to a prenatal diagnosis center.

There were many solemn consultations, hours of ultrasounds, moments of despair, and whispers of hope. At some point in the process we were told our baby had dwarfism, but they could not diagnose the specifics.

At the last ultrasound before I went into labor we were told it looked our baby would be, “A healthy dwarf.” The specifics of her diagnosis wasn’t what mattered to us. All we knew was that we were madly in love with her.

I went into labor at twenty-six weeks. They flew me by medical helicopter to a university hospital where I remained until Sadie arrived a week later at twenty-seven weeks.

She was perfect. She was beautiful. We were holding and loving our own flesh and blood! 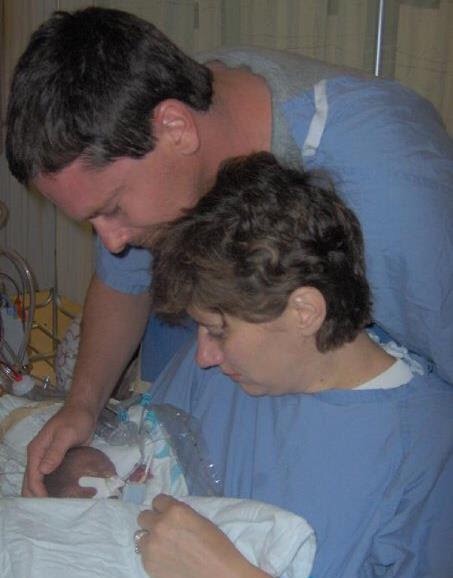 As the day went on, the doctors watched her closely. That evening they came into my hospital room and said these dreaded words that still ring in my ears today.

“We’re so sorry. Sadie’s too sick. She will not survive.”

Numb. Shock. Disbelief. Anger. Guilt. Fear. Paralyzing fear. I felt like an outsider observing someone else’s story and yet the pain was all too real. It couldn’t be. This life that had so much personality even in the womb, that had already been so loved and wanted, this babe that had made me the mother I’d always dreamed of being, was dying and there was nothing I could do about it.

No anguished prayer, no fist raised heavenward, no screaming at the medical staff, no world-renowned scientist or advancement in medical technology, no human effort could keep the inevitable at bay. My baby was dying.

This! This is who she was and is! This is the hole in my heart that I celebrate and grieve in the same breath. To minimize her life, to reduce her to cliche comments of having other children or quality of life is to shred my heart into another million pieces.

I am grateful that we have more healthy vibrant amazing children and I celebrate every single day with them, but none of them replace Sadie. Nor would I want or expect them too.

I am beyond grateful for all the connections we have made through the non-profit we started in Sadie’s memory, but I still long to feel the warmth of her little body again and smell her baby breath in my face.

My life is blessed far beyond my ability to articulate, but I live with the ache of Sadie’s absence every single day.

So for every mother who has suffered pregnancy or infant loss, I will not retreat in silence. I will not sit on the sidelines and pretend your baby didn’t exist or didn’t have an impact in your life. I will raise my voice along with yours until the day we stop saying, “it was just a miscarriage, just a pregnancy loss, they only lived…”

If you have never known this loss, but know someone who has, please consider letting them know you remember with them. Whether it is a card, a text, a cup of coffee and the words, “I remember,” the simplest gesture can make all the difference for those of us who carry our babies in our hearts instead of our arms.

To October. To moms and dads, brothers and sisters, grandparents and friends remembering our babies gone too soon.

The Sadie Rose Foundation will participate in the worldwide Remembering our Babies events October 15th for Pregnancy and Infant Loss Awareness Day. For more details, visit our website or Facebook page.